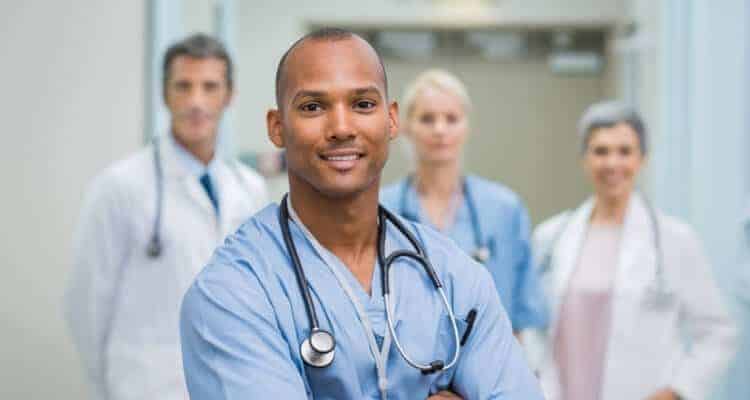 If you look at the nursing profession, it’s a field primarily dominated by women.

According to the United States Census Bureau in 2011, only about 10% of registered nurses (RN) and about 9% of licensed vocational nurses (LVN) were men (source).

Those numbers have been steadily increasing since the 1970s, were they were closer to 3% and 4% respectively.

In this article and in a series of other articles, we’re going to look at male nurses, and the roles they play in the nursing profession.

So, what is a male nurse called? A male nurse is called a nurse. A nurse is someone who has passed their boards and is licensed and trained to care for those who are hurting or sick. This has no bearing on the gender of the nurse.

*disclosure: this post may contain affiliate links. If you click and make a purchase, I may receive a commission. For more info please see my disclaimer.

What About the Term “Murse?”

If you look throughout the internet, you’ll find several mixed feelings about this. “Murse” is a term/slang that has been used to call a nurse that’s a guy.

You get “murse” by blending two different words together in this case, “man” and “nurse” together to get “murse.”

The act of combining two or more words together to form one word is nothing new. It’s called portmanteau (source).

If that sounds kinda strange, let me assure you that you’ve probably have heard or have done something like that before.

Here are some other examples of portmanteau:

Here’s another portmanteau of “murse.”

We could literally keep going, but I think you get the point.

Search our school database to find schools and get information on the programs that’s right for you. (Don’t worry it’s fast and free!)

If you look around the web, you’ll see that while there’s a lot of nurses who really don’t care about the term “murse” being used to call a guy that’s a nurse.

At the same time, you’ll also see that there are just as much if not more guys who really don’t like being called a “murse.”

One of the big reasons why so many guy nurses dislike the term murse is because many of them find it as a derogatory term. Because to many guys, the term nurse transcends gender.

To those guys, a nurse is a person (regardless of being male or female), who is trained to care for those who are sick and hurting.

How Do You Introduce Yourself to Patients?

I don’t know about you, but this is how I introduce myself to a patient.

“Morning Mr. Doe My name is Thomas, and I’m going to be the nurse taking care of you today.”

Hopefully, you found this article informative.

Let us know what your comments and thoughts are in the comment section below. For example: Are you a nurse that’s a guy? If so, are you ok being called a murse?

Thomas Uzuegbunem is a registered nurse who graduated with a bachelor's in business and went on to get his bachelor's of science in nursing. He's worked in the ICU, mental health (inpatient, outpatient), & GI specialty areas. He's the lead editor and founder of Nurse Money Talk.