In this article, we’re going to discuss the parts of a stethoscope.

For those of you that don’t know, the stethoscope is an essential part of the health care professional’s toolkit. It’s used for various reasons in just about every medical discipline.

Just about everyone performing a physical exam will use a stethoscope.

The stethoscope is primarily used to assess the heart and lungs but can be used in various other ways, including assessing blood vessels and bowel sounds.

A stethoscope, while looking simple or straightforward, is in fact, elegant and complex involving intricate parts.

Some variations of the standard stethoscope we’re going to talk about allow for more advanced diagnostic capabilities.

But for the most part, we’re going to keep it simple in this article.

So, what are the parts of a stethoscope:

*Disclosure: This post may contain affiliate links. If you click and make a purchase, I may receive a commission. For more info, please see my disclaimer.

Medical Term:
Auscultation: the act of listening to bodily sounds from the heart and other body organs as part of a medical assessment. Usually done by using a stethoscope (source).

What is a Stethoscope?

A stethoscope is a medical device used by medical professionals to listen to (or auscultate) different parts of the human anatomy.

Some of the more common reasons stethoscopes are used is to:

While we’re going to cover how to use the stethoscope in another article, let’s go ahead and cover all the different parts of a stethoscope, so you get a better understanding of how it works.

The Parts of a Stethoscope

We’ll start with one of the most basic parts of the stethoscope, the ear tips. You may think to yourself, “Aren’t ear tips pretty self-explanatory?”

Evidently not, because the first time I used a stethoscope, I put the ear tips in my ears backward!

You live, and you learn.

Ear tips can be anywhere from a soft dense foam consistency to hard plastic based on the quality of your stethoscope.

You want to find ear tips with both a soft yet firm consistency in your ear. Ideally, you want the ear tips to create a seal in your ears and occlude all outside sound.

Actually, some of those plastic ear tips in a more inexpensive stethoscope can downright hurt your ears after just a few seconds of your exam!

Now for the information I desperately needed before my first physical exam: how do you use the ear tips? Or rather, in which direction should you place the ear tips in your ear?

The short answer is ear tips should be directed toward your nose as you put them in your ears.

To fully answer this question, let’s look at the orientation of the ear tips.

Ear tips point in a distinct direction, and this is not because they were left out in the car for too long. They are created to comfortably and functionally mimic the natural direction of our ear canal.

By doing so, sound waves will travel in a path directed towards your inner ear, where processing sound into information for your brain starts.

To illustrate my point here’s a video that runs through how to put on a stethoscope correctly.

Last note, we all have different size ears. Many stethoscope companies package several different sizes of ear tips with their stethoscopes (similar to what they do with earbuds). I highly recommend spending some time and playing with each ear tip to figure out which one fits your ears the best.

Eartips fit snugly on, you guessed it, the ear tubes. Stethoscope ear tubes are usually made of metal.

The primary function of the ear tubes is channeling sound safely and accurately toward the ears, connecting the flexible tubing with the ear tubes.

The headset is the combination of the 2 ear tubes and ear tips. The headset is usually adjustable for better fitting. Again, we recommend spending some time customizing your stethoscope to create the ideal fit!

Here is where things get interesting for various reasons, one being the color selection!

The tubing is the flexible, sometimes colorful, part of the stethoscope. Its flexibility allows you to place it around your neck or over your shoulder.

There are three different types of tubing your stethoscope might come in.

Although this will allow for more than an adequate sound transmission, you may not be able to hear quite as much detail as the dual-lumen cardiology stethoscope.

An example of a single lumen stethoscope: 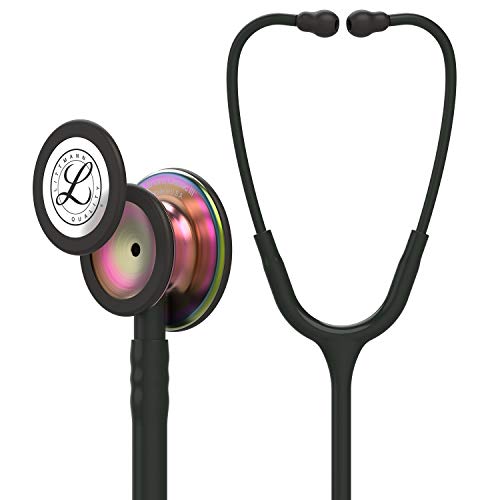 Dual lumen stethoscopes, such as the Littman Cardiology stethoscopes, have two separate tubes inside an outer (often colored) tube.

This subtle difference is significant because the two separate tubes create two separate sound paths, decreasing the amount of artifact noise you hear.

Your physical exam findings will be more accurate as the sound will be crisper. This will make your exams more reliable, but the stethoscope using the dual lumen do tend to cost more.

An example of a dual lumen stethoscope: 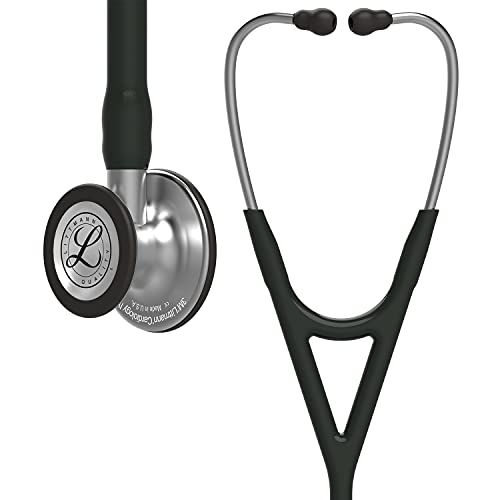 Double Lumens are a little different, as you can see from the picture below.

While the thought process of the double lumen is similar to dual lumen stethoscopes, the execution is quite different which makes a HUGE difference!

Double lumen stethoscopes have two large very separate tubes that track next to each other over half the way to the ear tip.

This setup, unfortunately, can cause a scratching noise which is not ideal for any physical exam.

An example of a double-lumen stethoscope is the MDF Sprague Rappaport: 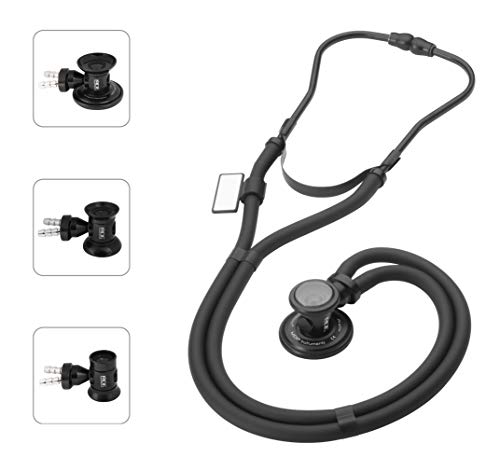 The stem of the stethoscope connects the (possibly colorful) tubing of your stethoscope to the chest piece.

As its function is to connect the two parts of the stethoscope, you will notice about a 2-3 cm overlap of flexible tubing (over) the hard metal of the chest piece.

The flexible tubing fits snug, allowing for the absence of movement, which could obscure a physical exam auscultation.

Depending on whether your stethoscope has one or two-sided chest pieces, the stem will also function to open the side of the chest piece you wish to use during your physical exam.

In the case of having 2 chest pieces, you will notice the stem can rotate a full 360 degrees. This is due to an internal ball bearing, which will catch at 180 degrees.

You’ll often see a medical professional tapping one side of the chest piece, usually the side they wish to use during their physical exam.

The examiner may twist the stem 180 degrees after tapping the chest-piece, which means they are adjusting the ball bearing to open the channel corresponding with the given chest-piece. But more about that later…

We’ve talked a lot about the chest piece, and for a good reason!!

The chest piece is the star of the show, as it is the part of the stethoscope that touches the patient and captures the sound leading to the auscultation portion of the exam! The chest piece comes in a few different styles:

As described above, your stethoscope may have one or two diaphragms. The diaphragm can be identified as the portion of the chest piece that resembles a drum. It is circular and completely covered by a thin piece of plastic.

Classically, the diaphragm was the larger circle of the chest-piece and was used to auscultate higher frequencies on larger portions of skin (chest, back, stomach).

Some stethoscope models have both a small diaphragm and a larger diaphragm.

The smaller diaphragm can be used to auscultate bruits of the neck or even used on pediatric patients.

Newer models of stethoscopes have a “tunable diaphragm,” allowing for auscultation of higher and lower frequencies by simply adjusting the applied pressure of the chest-piece (source).

Here is where it gets a little complicated. By definition, a bell is the part of the chest piece that is concave and hollow.

It does not contain a thin, flat plastic covering similar to a drum, which defines the above diaphragm.

It provides auscultation of lower frequencies by applying gentle pressure over the patient’s skin, careful to not press too hard (creating a tight seal).

Most people call the smaller portion of their chest-piece the bell, whether it has a diaphragm or not.

Many stethoscopes have the option for a true bell or a smaller diaphragm by allowing for a removal plastic “drum,” customizing the stethoscope to your needs.

Pro Tip:
If you were to find yourself in the middle of a shift with a broken diaphragm, you could create a functional diaphragm until you can replace the plastic.

It goes back to the physics class I wish I could block out. Pressing your concave bell with a moderate amount of pressure against your patient’s skin will replicate the seal found in a true diaphragm!

If you’re like me, you probably want to make sure you have the best stethoscope you can to do your job.

You can check out some of our stethoscope articles below, but if you’re just wanting a good stethoscope check out the Littmann Classic III…

Here are those other stethoscope articles:

Here are some frequently asked questions related to the parts of a stethoscope.

As you can see, a stethoscope may look simple, but once you start looking at each part of the stethoscope, you’ll see there’s a lot of science in each one.

If you need a quick video recap of some of the things we talked about, here’s a video that goes over the different parts of a stethoscope.

If you have any thoughts or questions, let us know in the comment section below.

Related Article to Parts of a Stethoscope